Yes! It has happened!

The grand start of the most interesting project in network business has finally taken place! And it took place in the confines of one of the largest venues in Russia and Europe – Luzhniki!

The official grand start of the Nonix project was preceded by the diligent and energetic work done by a large team of ‘rhetoricians’, the pioneers of the project who completed individual training by the Dr. Nona company’s Marketing Manager, Aleksandr Shtukert.

During the last ten weeks, we organized three sessions of the unique ‘Rhetoric’ training program in Yekaterinburg and Minsk, with a mid-September presentation in Krasnodar Krai to prepare us for the program’s opening. All of this was accomplished to ensure the official start of the project would be a total success.

And we’ve made it!

That morning at Luzhniki, enthusiasm and excitement were in the air: hundreds of young, attractive and energetic people filled up the space of the Small Sports Arena, fronted by four brand-new Mercedes-Benz C-Class automobiles waiting for their new owners. Each of our project partners who had their photos taken in front of those dream cars believed in their luck and hoped to hear their names announced among the winners in just a couple of hours! But this was just the beginning. 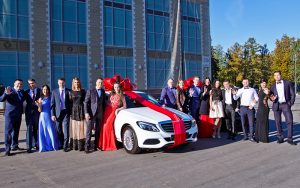 A festive atmosphere in the foyer, press wall photos, roll-up stands – all this led to expect that when the auditorium doors were open, something special would occur inside.

At exactly 11:00, the doors to the hall were pushed open and the lucky ones who had managed to attend the event were immediately fascinated by the decorations and stage lighting. The celebration had begun! 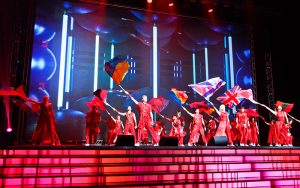 After a video clip telling the company’s history, Dr. Nona and the company’s president Michael Shneerson entered the stage. All guests were immediately submerged in the atmosphere of trust and mutual understanding. As always, the greeting words and the presentation of the company and its products were met with booming applause.

Following that, the company’s CEO Ruth Shneerson appeared before the audience. It was not just a speech about values – it was a speech about friendship and love, and soon she was joined by our new friends, the North Crown charity foundation and the children of the Mitinskiy orphanage who had come to the event and presented a musical performance. 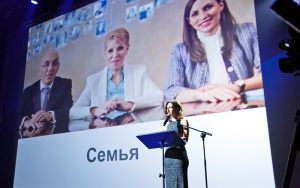 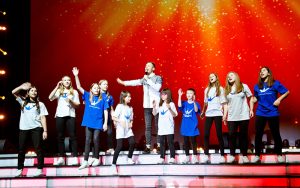 The celebration event featured such guests as the Todes dance troupe, Anton Azarov, Mariam Merabova and the Laser Dream music band. The audience experienced the whole range of emotions, from amazement at what was happening on the stage to excited ovation and the joy of being involved in the beginning of a new era for the company.

Following a break, Aleksandr Shtukert and project developer Sergey Gubanov caught the audience off guard by dramatically mounting the stage, or rather mounting their bikes and rolling right onto it. Thus the new Nonix Crypto Solution program had been officially started!

The next to enter the stage were rhetoricians, the people who had spent ten weeks preparing a solid foundation for the start of the project. As the project’s anthem was played, they set the whole audience afire.

You would’ve thought the time was right to bring the celebration to an end. But in fact, the most interesting part still lay ahead.

First, there was the drawing of valuable prizes for the guests of the event. 10 lucky winners went home carrying new smartphones (iPhone 8, iPhone 8 Plus, Samsung 8) and tablets (iPad and Samsung).

50 of the most active distributors were called upon the stage and awarded gift checks earned during the last month.

The climax of the event was the prize draw for 4 new Mercedes-Benz cars. Oh, what an exciting and touching moment that was! Not only the winners were overwhelmed with emotions, but also those who rooted for them and shared their joy! After all, it’s just the way that it should be, for we are all a huge close-knit family that has been welcoming new members for the past month!

For us, there’s nothing impossible!

Are you with us?!

Check out the photos from the grand start of the NONIX project in the albums below.

To view an album, click on the corresponding link.

And don’t forget to share your photos on social networks!

Album No 1 – Entrance to “Russia” Concert Hall in Luzhniki

Album No 4 – Upon the Stage

Album No 5 – Awards and Encouragement

Leave a reply Click here to cancel the reply